While working on the action sequence search vs. policy parameter search, I noticed a few things:

This left me with a number of questions, one of the bigger ones being what the impact of noise is on the greedy vs. hoo-greedy policies.  I ran all four methods (action sequence and policy parameter search with/out replanning) in the inverted pendulum domain with varying amounts of noise.  The full action range in the domain is from -50 to 50 units, and in the experiments I ran the actions were corrupted by noise uniformly distributed from 0 to +/- 4 units of noise.  The results are below: 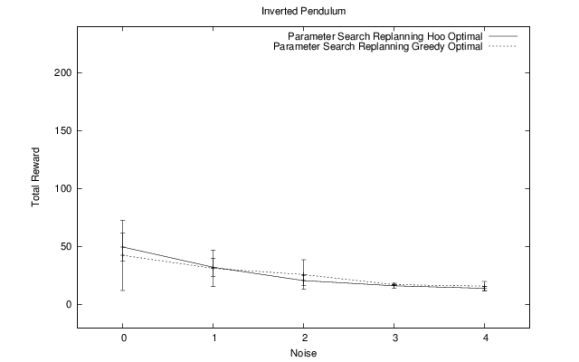 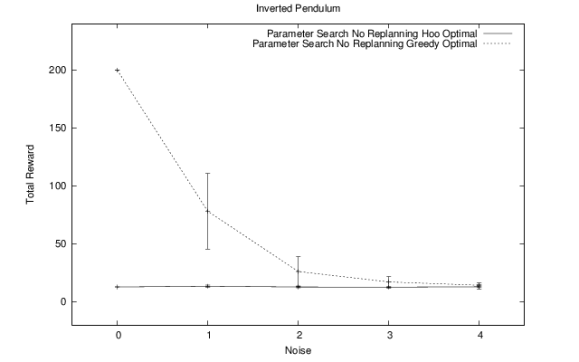 So from here the new basic takeaways are in the inverted pendulum domain:

Aside from that, I’m not sure to say.  Unfortunately, I can’t really think of anything concrete to pull from the experiments here and in the double integrator so I think I’ll keep running experiments and see what other things seem to come up.

Update: a similar graph rolled in 1 for the double integrator domain.  Its a bit of a mess, but action sequence search with replanning use the Hoo-suggested action still comes out on top.  There are some gnarly error bars because I only ran a few trials of each as they take a bit of time:

Performance of all the approaches in the double integrator

Another update, here are results of a similar experiment in the Ball-Beam domain: 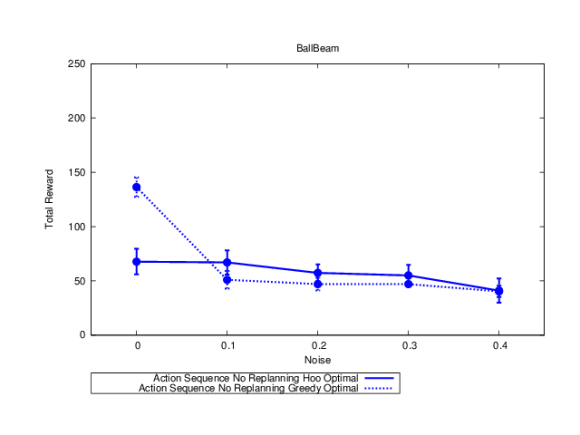 Another update, here are results of a similar experiment in the Bicycle domain: 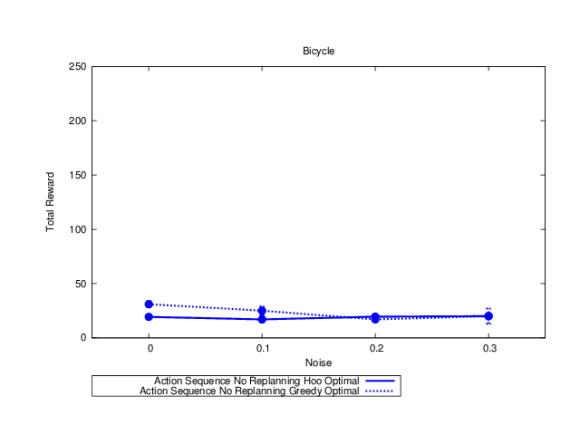 Have you (or could you) fill in a 2×2 table that looks something like this?

I just finished up implementing and running these different approaches.  Here’s a picture: 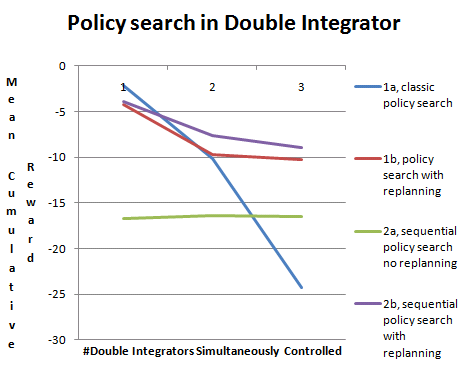 So more of an explanation.  The x-axis represents the number of double integrators (DIs) simultaneously controlled, the y-axis represents the avg. cumulative reward of each agent.  Episodes were 200 steps long, and the planners were given access to 100 roll-outs from a generative model for each step in the episode.  1a and 2a took all 200*100 rollouts upfront and attempted to find an optimal policy, while 1b, 2b replanned from scratch and used 100 rollouts per step.

All algorithms used HOO to search the parameter space.  In 1a and 1b, HOO was used to find weights of a neural net encoding the policy of an agent.  The structure of the net was to have |S|+1 inputs, 2|S| hidden nodes, and |A| output nodes.  Accordingly, the size of the neural network grows polynomially with the number of DIs controlled.  1a and 1b yielded very poor (close to random) performance when the final weights were selected by HOO according to a greedy search down the trees by the mean.  In the graph the performance shown is the result of simply taking the weights from whichever run yielded the maximum reward, which is safe to do in a deterministic domain but not in a stochastic one (which this was).

For 2a, 2b an action sequence was found by HOO/HOLOP and then the “best” policy was selected by greedily following nodes down the HOO tree, which yielded better results in that case.

The most interesting result I find is that classical policy search (1a) starts out with the best performance but quickly degrades to random performance as the number of parameters describing the policy grows.  1b and 2b, which do replanning are much more tolerant of the increasingly difficulty of the task, probably because of the fact that they aren’t trying to find a good representation of the policy globably, and can recover from a few poor policy searches by later ones later on.  2a, which is HOLOP without planning is quite bad, but had very low variance in returns (not graphed here), with close to constant performance, and at least managed to stay above random performance.

I know this isn’t the graph you asked for, as you wanted to compare them between computation performance before and during the run, but I’m not sure how to really show that.  With the a’s,  very close to 100% of the computation is done before and very close to 0% is done during the run, and vice-versa with the b’s, so I don’t think its interesting in really graphing?